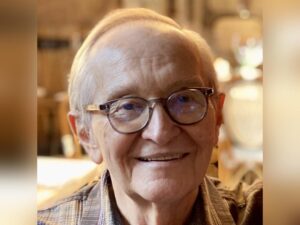 Our beloved local dharma teacher, David Hughes, passed away on October 31, 2022. Our whole community deeply mourns his passing. A Celebration of Life will be held in Maine on Saturday, December 17, from 11am-2pm at the Nonantum Resort in Kennebunkport. Eyes of Compassion Sangha is planning a local celebration of his life to take place after the first of the year, which will be announced on the EoC email list and on this website. In gratitude for and in honor of Dave’s life, the family requests any donations be made to the Thich Nhat Hanh Foundation, which fosters peace and community among all people, animals, plants, and our planet.

We are copying in his full obituary, from this site, below.

David Emery Hughes, 75, passed away on October 31, 2022. Despite his 20 years of health challenges, he remained a pillar of strength, maintaining his intellect, witty humor and overall zest for life; his resilience is unmatched.

David was born in Pittsburgh, PA, on August 24, 1947 to William and Margaret Hughes. He attended American University and Georgetown Law School, before working on Capitol Hill in D.C, where he also was active in the Civil Rights Movement. In his early 30’s, he moved to Maine with the resolve to live life on his own terms. While working as Senior VP and General Counsel at UNUM, he met his wife of 35 years, Peg. Together, they raised their family in Cumberland and spent many summers sailing the coast. After 40 years in the Greater Portland, ME area, they moved to Denver, CO to be closer to their two daughters.

David led a rich life outside of his career and remained active in his community, seeking knowledge and new experiences right up until his passing. He kept bees, played saxophone, taught English as a Second Language courses, mentored high school students, and deepened his practice of Zen Buddhism, including teaching mindfulness at hospitals to patients and staff members alike. In 2009, David was ordained in the Plum Village tradition of Thich Nhat Hanh. In 2021, he received the lamp transmission to become a dharma teacher.

He spent his final days surrounded by his beloved family: his wife, Peg, his daughters Marissa and Sarah, his sons-in-law Dan and Leland, and his new grandson, Camden. He is also survived by his brother, Bill, and his nieces, Maggie and Jackie. His bodily form is being lovingly returned to the Earth and sea, after a beautiful water cremation at Be a Tree Cremation.

A Celebration of Life will be held on Saturday, December 17, from 11am-2pm at the Nonantum Resort in Kennebunkport, Maine. In gratitude for and in honor of Dave’s life, the family requests any donations be made to the Thich Nhat Hanh Foundation, which fosters peace and community among all people, animals, plants, and our planet.

We are located in Denver, Colorado, U. S. A. We have been continuously sitting together since 2001. We come from all backgrounds, cultures and ideologies and have been drawn together by the Plum Village tradition and the teachings of Thich Nhat Hanh. We sit together with the intention of increasing peacefulness and insight in families, our society, and ourselves. We have a wonderfully diverse group of practitioners, some with very little experience, others with many years of sitting.

Eyes of Compassion welcomes everyone regardless of your racial or ethnic heritage, gender identification, or sexual orientation. We expressly support the Call to Love in Action issued by the ARISE Sangha in our Tradition, and the Statement Speaking Out Against Anti-Asian Violence issued by the San Francisco Zen Center.

Interested in learning more about our community or an event? You can email us here:
Eyes of Compassion
e: eoc.ctc@gmail.com

Our email list is a “Google Group.” You need a Google account to join (e. g., a gmail.com email address). When you click on the link above, you should get a message saying: “You don’t have permission to access this content. For access, try asking to join the group . . .” and click on the link there. A form will be displayed saying “Ask to join Eyes of Compassion,” which you can fill out and submit.

If you do not have, or do not wish to use, a Google account, email us at eoc.ctc@gmail.com and we can add you manually.