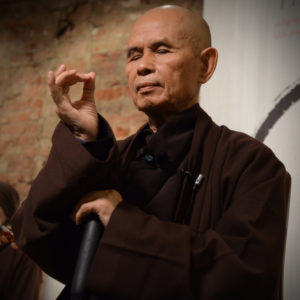 Our beloved teacher Thich Nhat Hanh, founder of the International Plum Village Community of Engaged Buddhism, passed away on January 22, 2022.

One of the best known and most respected Zen masters in the world today, poet, and peace and human rights activist, Thich Nhat Hanh (called Thây by his students) led an extraordinary life. Born in central Vietnam in 1926 he became a monk at the age of sixteen. The Vietnam War confronted the monasteries with the question of whether to adhere to the contemplative life and remain meditating in the monasteries, or to help the villagers suffering under bombings and other devastation of the war. Nhat Hanh was one of those who chose to do both, helping to found the “engaged Buddhism” movement. His life has since been dedicated to the work of inner transformation for the benefit of individuals and society.

In Saigon in the early 60s, Thich Nhat Hanh founded the School of Youth Social Service, a grass-roots relief organization that rebuilt bombed villages, set up schools and medical centers, resettled homeless families, and organized agricultural cooperatives. Rallying some 10,000 student volunteers, the SYSS based its work on the Buddhist principles of non-violence and compassionate action. Despite government denunciation of his activity, Nhat Hanh also founded a Buddhist University, a publishing house, and an influential peace activist magazine in Vietnam.

After visiting the U.S. and Europe in 1966 on a peace mission, he was banned from returning to Vietnam in 1966. On subsequent travels to the U.S., he made the case for peace to federal and Pentagon officials including Robert McNamara. He may have changed the course of U.S. history when he persuaded Martin Luther King, Jr. to oppose the Vietnam War publicly, and so helped to galvanize the peace movement. The following year, King nominated him for the Nobel Peace Prize. Subsequently, Nhat Hanh led the Buddhist delegation to the Paris Peace Talks. 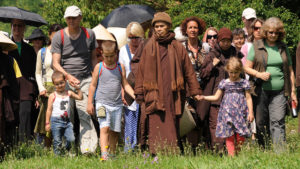 In 1982 he founded Plum Village, a Buddhist community in exile in France, where he continued his work to alleviate suffering of refugees, boat people, political prisoners, and hungry families in Vietnam and throughout the Third World. He received recognition for his work with Vietnam veterans, meditation retreats, and his prolific writings on meditation, mindfulness, and peace. He published at least 85 titles of accessible poems, prose, and prayers, with more than 40 in English, including the best selling Call Me by My True Names, Peace Is Every Step, Being Peace, Touching Peace, Living Buddha Living Christ, Teachings on Love, The Path of Emancipation, and Anger. In September 2001, just a few days after the suicide terrorist attacks on the World Trade Center, he addressed the issues of non-violence and forgiveness in a memorable speech at Riverside Church in New York City. In September of 2003 he addressed members of the US Congress, leading them through a two-day retreat.

Thich Nhat Hanh continued to live in the Plum Village community he founded, teaching, writing, gardening, and leading retreats worldwide.  In 2005 he was finally allowed to return to visit Vietnam after 39 years of exile, though there continued to be controversies between his followers in Vietnam and the government. In 2014 he suffered a serious stroke which left him partially paralyzed and unable to continue teaching.  In 2018, he moved back to his root temple in Vietnam.  On January 22, 2022, he passed away peacefully at Từ Hiếu Temple in Huế, Vietnam on 22nd January, 2022, at the age of 95.

Thich Nhat Hanh came to Colorado on several occasions to lead retreats.  In 2002 he came to the Shambhala Mountain Center near Red Feather Lakes. In 2003 he came to Estes Park, where the retreat took place at the YMCA of the Rockies. He returned to Estes Park to lead retreats in 2005 and 2007.  In 2009 he was scheduled to come to Estes Park, but at the last minute suffered an illness and couldn’t come.  In 2011, he came to Colorado for what turned out to be the last time. Then in 2014, after his stroke, he had to stop teaching altogether.

A more complete biography can be found on the Plum Village website.

How do you pronounce Thich Nhat Hanh?,
The English pronunciation is: Tik · N’yat · Hawn However since Vietnamese is a tonal language, this is only a close approximation for how one would pronounce it in Vietnamese. (His name is sometimes misspelled as Thich Nhat Hahn, Thich Nhat Han, and Thich Nat Han.)

By his students he is affectionately known as Thay (pronounced “Tay” or “Tie”), which is Vietnamese for “teacher.”

Interested in learning more about our community or an event? You can call or email us:
David Hughes
p: (207) 420-0093
e: mindfulinme@gmail.com

NOTE: Our e-mail list is a “Google Group,” and you will need a Google account (e. g. a “gmail.com” address).  You should get the message “You do not have permission to access this content. For access, try asking to join the group . . .” and clicking on the link there.

If you do not have (or do not want) a Google account, e-mail the web coordinator at keith “at” compassionatespirit “dot” com and we can add you manually.

We are located in Denver, Colorado, U. S. A. We have been continuously sitting together since 2001. We come from all backgrounds, cultures and ideologies and have been drawn together by the Plum Village tradition and the teachings of Thich Nhat Hanh. We sit together with the intention of increasing peacefulness and insight in families, our society, and ourselves. We have a wonderfully diverse group of practitioners, some with very little experience, others with many years of sitting.

Eyes of Compassion welcomes everyone regardless of your racial or ethnic heritage, gender identification, or sexual orientation. We expressly support the Call to Love in Action issued by the ARISE Sangha in our Tradition, and the Statement Speaking Out Against Anti-Asian Violence issued by the San Francisco Zen Center.